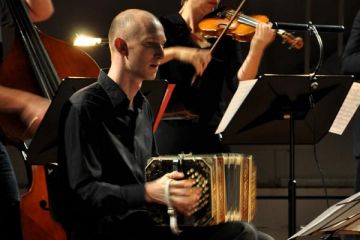 Christian Gerber is one of the most sought after and versatile bandoneon.

With its founded in 2001, "Quinteto Angel" He is a regular guest all over Europe and shared the stage with numerous sizes of the tango as Alberto Podestá, Juan José Mosalini, Alfredo Marcucci, Raul Garello, Luis Stazo and others.

In addition to the participation in numerous genre - cross-border projects and concerts with contemporary music, film and theater music and round - compositions (eg for the German Theater Berlin, the Schaubühne Berlin, the Hamburg Schauspielhaus) his musical work from.

Since 2003, he plays with the group "Tango Crash" ("Prize of German Record Critics' 2008") and is part of the group "Stazo Mayor" by Grammy award winner Luis Stazo.