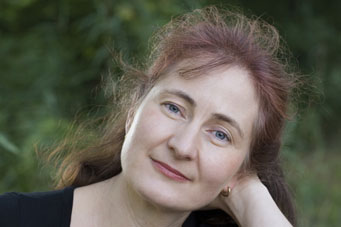 Ulrike Payer counts among the most versatile pianists of our time. Her repertoire not only includes solo pieces, as well as all renowned concerts and chamber music pieces and lieder, but also covers various styles and eras, from Baroque to modern day classical music.
Having been born into a theatre-based family in Wuppertal, Ulrike Payer studied in Brussels, Cologne and Hanover, winning several international prizes. Additionally she studied with Alexis Weissenberg, Tatjana Nikolajewa and the Amadeus Quartet.
Apart from working with different orchestras und such renowned conductors as Christoph Eschenbach, Kirill Petrenko and Justus Frantz, Ulrike Payer is a regular guest at festivals throughout the world, for example at Schleswig Holstein Musik Festival, Rheingau Musik Festival, Delfter Kammermusikfestival, Peking Festival, Usedomer Musikfestival, La folle journée au Japon. Radio-, CD- and TV recordings document the wide variety of the artist’s work.
As a pianist, Ulrike Payer distinguished herself not only in the world of classical music, but also as an interpreter of Tango Argentino. An encounter with Alfredo Marcucci in 1998 was followed by concert appearances and an intense and fundamental exploration of the genre. Consequently, Ulrike Payer played concerts alongside the most prominent Argentine musicians, such as Cholo Montironi, Norberto Bondino, Carlos Buono and the Sexteto Mayor .
As a pianist with the NDR-Sinfonieorchester, Ulrike Payer worked with conductors Semyon Bychkov, Michael Gielen, Alan Gilbert und Andris Nelsons. Her chamber music partners include Isabelle van Keulen und Orfeo Mandozzi; in recent years, she has co-operated with Christian Poltéra, Patricia Kopatchinskaja, Alisa Weilerstein und Saschko Gawriloff. A close collaboration exists with the actors Nina Hoger and Christian Brückner.
From 1999 to 2003 Ulrike Payer held a teaching assignment at the Hochschule für Musik und Darstellende Kunst in Frankfurt am Main. Since 2004, she has been teaching at the Musikhochschule Mainz and the Musikhochschule Saarbrücken and is currently working with Nobuko Imai and Nils Mönkemeyer at Kronberg Academy.