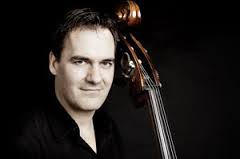 Rüdiger Ludwig was born 1970 in Mainz and received his first double-bass lessons at the age of fifteen. After one year he joined the National German Youth Orchestra and  participated in the young talent classes from the conservatory of Mainz and two years later he continued his studies with Professor Günter Klaus at the Hochschule für Musik und Darstellende Kunst Frankfurt am Main.
1991 he joined the European Union Youth Orchestra and performed as principal double-bass under the direction of conductors such as Claudio Abbado, Bernard Haitink, Carlo Maria Giulini, Mstislav Rostropovich, Vladimir Ashkenazy and James Conlon.
After playing for one year at the Saarbrücken Radio Orchestra, Rüdiger Ludwig became 1995 co-principal double-bass at the NDR Hanover Radiophilharmonie, where he since performs in concerts both for radio and television in Germany and countries abroad like Japan, Spain, Brasil, Argentina, Poland, Italy, Switzerland, France and Norway.
Next to this he performs regularly as a guest in orchestras like Hamburg State Opera, WDR Radio-Orchestra Köln, HR Radio-Orchestra Frankfurt, Luzern Festival Orchestra and the Norwegian Chamber Orchestra. Over the years he interpreted all the major double-bass concertos with several orchestras.
Rüdiger Ludwig made recordings for the NDR Radio, both solo and chamber music as a member of the Ensemble Oktoplus among other soloist of the NDR Radiophilharmonie. Furthermore he appears regularly on chamber music platforms with artists like Isabelle van Keulen, the Leopold String Trio and Ulrike Payer.
He performs on a Auguste Sebastien Phillipe Bernardel („Вernardel Pere“) double-bass from 1856.