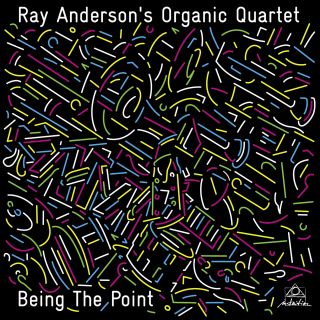 € 17.95
Add to cart
Product is on stock
22-07-2015 wegotmusic.de
""Being the Point is full of beautiful sounds. Ray Anderson here unfolds a wide range of styles and moods. A successfull production.""
05-07-2015 Radio Dreyeckland
""Being The Point proves to be a paintbox full of sounds, a homogenously designed quartet where the organ is the perfect vehicle for the late realisation of Ray Anderson's youthful dreams.""
01-06-2015 Jazzpodium
""The music, that Ray Anderson plays together with the Organic Quartet, can always change and refine itselfe. It also has the potential to gain more and more depth. The Organic Quartet is for Ray Anderson the perfect formation to display everything that he has learned in his life so far, both stylistical and instrument wise." "
18-05-2015 Fono Forum
""Ther is nothing more to wish for. With Latin Jazz detours, ballads, dynamic themes and an exciting groove, Anderson & Co create a modern version of organ-combos that were popular in the 1960ths."
Music 4 stars
Sound 4,5 stars"

07-05-2015 Jazzthetik
""Rarely Ray Anderson has sounded so relaxed and his new band wallows in southern soul-sound, that crackle full of expressiveness."
4 stars"

04-05-2015 Jazzpodium
""...Ray Anderson impressively demonstrated his joy for playing and his skills on this CD.""
04-05-2015 Stereo
""With Latin Jazz, ballades, originals and an exciting groove, Anderson & Co create a modern version of the popular organ combos from the 1960ths."
Music 4/5
Sound 3,5/5"
28-03-2015 Berliner Zeitung
"Ray Anderson does not imitate - with his mixture of motown and avantgarde, congo squares and hardbop, blues and great black music he creates a musically attitude that confinces with very current transformations."
23-03-2015 Jazzthing
"The astonishing thing about this record is not only the variety of influences but the impressive logic that the old fox uses to combine all of them without loosing himself."