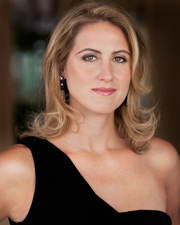 Jacquelyn Wagner, CAS ’03, is living her dream. Two summers ago, as a new college graduate, she auditioned for European opera roles in New York as part of the New York International Opera Auditions (NYIOP) program and landed her first opera contract with the Marseilles opera house in France. Since then, she has studied in Germany on a Fulbright Scholarship, and in September, Wagner will begin a contract with the Deutche Oper in Germany.


Before becoming immersed in the opera life of Europe, Wagner got her training from an Oakland University professor, years before she started here as a student.


“My father plays the French horn in the Detroit Symphony Orchestra, and through that he knew of a violinist whose wife taught voice. So, I started studying with Edith Diggory (an applied music instructor at OU) in high school, and then said that I couldn’t leave her, since she is an unbelievable teacher. So, I just got my undergrad degree at Oakland. It worked out perfectly,” said Wagner. “She is one of the best voice teachers I have come across. The results that she can produces are unreal. She shaped my voice into what it is today.”


While at OU, Wagner performed in shows and recitals on campus including, “The Gondaliers,” “Harrison Loved His Umbrella,” “Too Many Sopranos” and “Suor Angelica.” She also had four recitals and performed with the show choir.


Wagner said Michael Gillespie, associate professor of theatre, and Danny Jordan, special instructor of music, were also influential in teaching her things that she still applies to her career.


As a young singer, Wagner is thankful for the NYIOP program, which brings European opera houses to the U.S. for American singers to audition. It saves the students thousands of dollars traveling around Europe trying to find singing opportunities.


In France, Wagner performed the role of Fiordiligi in “Cosi fan tutte” with the Marseilles Opera.


“I was in paradise there. It is a stunning city, right on the Mediterranean Sea, and was just a perfect six weeks of my life. The director, Guy Joosten, was fantastic and it was something that I will always compare the rest of my opera experiences to,” said Wagner.


After six weeks in France, Wagner, who had obtained a Fulbright Scholarship, left to study German Lied and learn the language, which is crucial for an opera singer. Wagner spent six weeks in Kiel with 10 other students for intense German classes and then moved to Cologne, where she lived for two months. The city didn’t fit her, so she moved to Berlin, where she is currently living.


“The Fulbright organization has been unbelievably kind to me by letting me pursue exactly the surroundings and situations that I need. It is really a phenomenal opportunity,” said Wagner.


Wagner said she is comfortable with the German language and can have conversations. She is continuing to study the language and hopes to tackle French next.


Last summer, Wagner again auditioned for NYIOPS, but in Berlin. She said many of the top opera houses were present for the auditions and she was offered a one-year contract with Deutsche Oper.


“I always knew I wanted to be an opera singer. At no time has that changed,” said Wagner.


Singing is something Wagner has done her whole life, and she began seriously studying when she met Diggory in high school. She has no plans to stop singing anytime soon and, for now, would like to continue her singing in Europe.


“I hope to stay in Europe for another five years at least,” said Wagner. “Whether that means just traveling around, or staying in one city, that is to be decided. But I like it here so far. I will stay for a while. Plus, it is better to learn things over here and there are more opportunities for singers.”


After she leaves Europe, Wagner would like to sing in American operas as well.


Until then, Wagner continues to explore more than just opera and performance in Europe.


“I can see all of these spectacular things, museums, churches, nature,” said Wagner. “We really have nothing like it in the U.S. Here, there is so much history, character and interesting things every where you go.”

If you want to see vocal excellence watch her 2008 performance directed by PLACIDO DOMINGO:http://www.youtube.com/watch?v=lUC0T4voNSg Richard Strauss
NOW FOR € 14,36
€ 17.95
Add to cart
19-10-2016 Edison Nomination
""Every recoring form Richard Strauss his opera Arabella is a accession. It even more is when director Marc Albrecht the Nederlands Philharmonisch Orkest with choir and solists lades above himself."  "
17-09-2015 Het Parool
"4**** stars
''The cast, with Jacquelyn Wagner (Arabella and Agneta Eichenholz (Zdenka) in superb roles, is fantastic and so is the playing of the Netherlands Philharmonic Orchestra.'"
11-09-2015 Trouw
"4****stars ''The critics are positif without any exception, especially about the orchestra and the conducter, they also bring the musical excitement to the cd''"