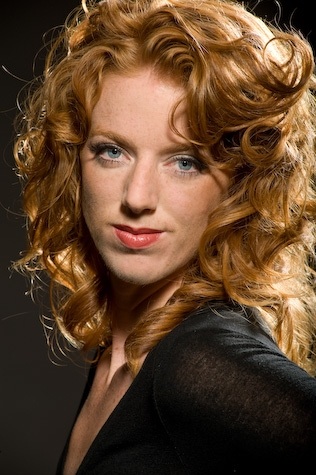 As an accordionist, Marieke acquired ample experience with solo and chamber repertoire in The Netherlands and abroad. During the outdoor concert on the Museumplein, she played with the Royal Concertgebouw Orchestra. At the yearly concert in the Royal Palace of The Netherlands, she also performed Mauricio Kagel’s famous Tango Alemán with the composer himself, for Her Majesty the Queen.

At the Gergiev Festival, Marieke has played in Amsterdam, Antwerp, London, and Vienna, with the Rotterdam Philharmonic Orchestra conducted by Valery Gergiev. As a soloist, she also performed with the Nieuw Ensemble, the Asko-Schönberg Ensemble, and with Orkest De Ereprijs. Furthermore, she has also played in various musical theater productions. For the last five years, she has been artistic director of the music theater company !YNX.
Many original compositions were written for Marieke and her accordion. She works frequently with prominent contemporary composers such as Martijn Padding, David Dramm, Chiel Meijering, Anke Brouwer, Janco Verduin, and Seung-Ah Oh. In 2010, she started her own foundation Tasty Fingers to promote the instrument in its broadest way possible, and to support the accordion as a professional instrument.

Marieke is also part of accordion quartet Big House, where a strong collaboration with contemporary composers and their music forms the ultimate starting point. Furthermore, since 2013, she has worked together in a duo with violinist Cécile Huijnen, concert master of Het Gelders Orkest. The two released two romantic albums with the label Challenge: Dance! in 2015 and Love! with the soprano opera singer Eva-Maria Westbroek in 2019. 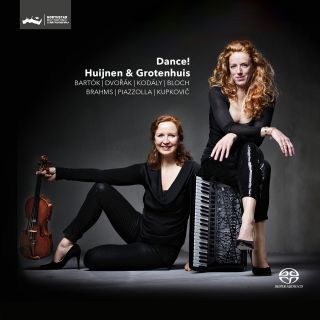 Antonín Dvořák, Zoltán Kodály, Ernest Bloch, Johannes Brahms, Ladislav Kupkovič, Béla Bartók
NOW FOR € 15,96
€ 19.95
Add to cart
11-01-2016 Luister Magazine
"Luister  10!
''It's a small piece yes, but of the brilliant sort. Huijnen is shining as a soloist here. Offcourse driven happily by her partner. This album makes you smile.'' "
01-01-2016 Luister
"One of the Luister 10's of this issue."
14-11-2015 De Telegraaf Weekeinde
"''They are a great team and next to vivacious, all is well taken care of in every detail''"
04-11-2015 Volkskrant
"4****stars
''It works well. You hear violinist Cécile Huijnen addressing her primal power. In a seductive way she spins around accordionist Marieke Grotenhuis. She whips her up and turns her back to her, being naughty, as the most beautiful girl in town, who knows what she is worth. “"