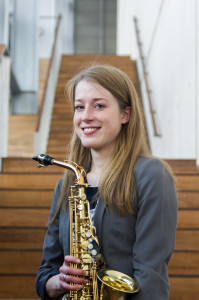 Dineke Nauta (1992, Leeuwarden, the Netherlands) started playing the saxophone at the age of nine and was  from 2008 till 2010 a student of Peter Stam in the “Young Talent” program at the Prins Claus Conservatory in Groningen. Since 2010, she has been studying with Arno Bornkamp at the Conservatory of Amsterdam. In 2015 she completed her Bachelor studies succesfully and was accepted tot he Master program. In 2010, Dineke received a first prize in the regional final of the Dutch competition “Prinses Christina Concours” and a second prize and public award in the national finals. A year later she earned the first prize in the competition of the Dutch Foundation for Young Music Talent. In November 2011, Dineke toured Greece at the invitation of the Dutch embassy. Besides the Ebonit Saxophone Quartet, Dineke is a member of the Dutch Saxophone Octet.
Dineke took part in masterclasses with, among others, Claude Delangle, Vincent David, Marcus Weiss, Jean-Marie Londeix, Christian Wirth, Jean-Yves Formeau and Christian Lauba.