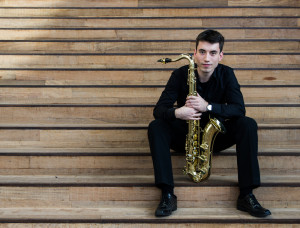 Johannes Pfeuffer was born in the year 1990 in Würzburg/Germany. Already in his early childhood, his parents could remark a great joy for music and after some years on the recorder and the piano, Johannes began to play the saxophone at the age of nine. He was especially amazed by the playing of the Jazz-Legend Charlie Parker but his interest for the classical saxophone grew steadily. At the age of sixteen, he was admitted to the young talent program of the Hochschule in Würzburg where he received lessons from Prof. Lutz Koppetsch. Meeting Koppetsch marked a turning point in Johannes’ musical development. Fascinating for him was the great musicality and the joy for music of his new teacher.
During his studies in Würzburg he won two times a first prize with the highest points in the national competition Jugend Musiziert. This success enabled him to make his debut as a soloist with the Brandenburgischen Staatsorchester and the Junge Philharmonie Würzburg, to perform a concert in Lisbon/Portugal and to play the Pictures at an Exhibition with the Youth Orchestra of Bavaria, conducted by Mariss Jansons.
While finishing secondary school, Johannes visited frequently masterclasses with Claude Delangle, Arno Bornkamp, Vincent David and Jean-Denis Michat. He entered the famous saxophone class of Arno Bornkamp in Amsterdam after graduating from high school.
Johannes received the cultural sponsorship award of his hometown Würzburg, as youngest awardee in the history of the city. In 2014, he finished his Bachelor-Studies at the Conservatory of Amsterdam with the highest distinction Cum Laude.