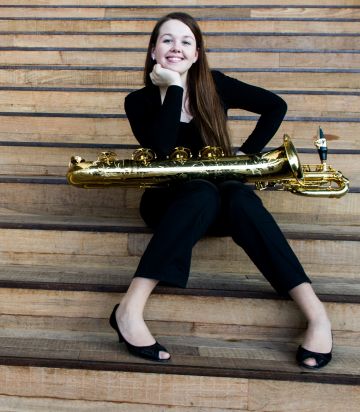 Paulina Marta Kulesza started her musical studies at the age of 14 with Krzysztof Witkowski, followed by Sławomir Bielski, with whom she studied until 2010 in a Secondary State Music School in Białystok (Poland). While there, she won both the 3rd prize and later the Distinction prize at National Saxophone Festival in Przeworsk, a Distinction prize at National Audition for Chamber Music Groups in Wrocław, and a 3rd prize at the III International Competition for woodwind instruments in Wrocław. Paulina is a two-time recipient of the Otwarta Filharmonia Agrafki Muzycznej scholarship for young and talented musicians.
In the fall of 2010 Paulina began her studies in Conservatorium van Amsterdam in the class of Arno Bornkamp. Since then she was a 1st prize winner at the ClariSax Competition in Valenciennes (France), won the audition for the Orchestra 1813 in Italy and receive a scholarship Młoda Polska from Polish Minister of Culture. In the 3rd year of her bachelor studies Paulina did an exchange studies in the Conservatory of Versailles with Vincent David. In 2014 Paulina finished her bachelor studies and started her master degree in saxophone and chamber music, being at the same time a full-time student of Nederlandse Strijk Kwartet Academie together with Ebonit Saxophone Quartet.
Paulina had performed with Rotterdam Philharmonic Orchestra conducted by James Gaffigan and twice with Radio Philharmonisch Orkest conducted by James Gaffigan and Markus Stenz. Paulina has participated in many masterclasses and masterclasses including the 2010 and 2012 International Saxophone Week (Amsterdam) and the Contemporary Music Masterclass with Jean-Marie Londeix and Christian Lauba (Amsterdam). Paulina has had the pleasure of receiving lessons from Christian Wirth, Vincent David, Claude Delangle, Jean-Yves Formeau (France), Jan-Schulte- Bunert (Germany), Willem van Merwijk (the Netherlands), Radek Knopp and Paweł Gusnar (Poland).
In March 2015 Paulina was invited to the project Music for Peace, where together with the founders of the project (Vitaly Vatulya and Maria Nemtsova) were touring and giving masterclasses in the post-conflict zones of Balkan countries.