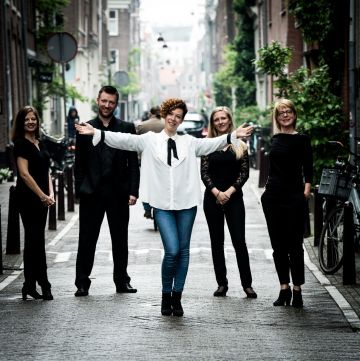 On a sunny Saturday afternoon Charlotte sang French chansons at Amsterdam’s Noordermarkt, where she was discovered by viola player Odile Torenbeek. The next step was the founding of the highly acclaimed programm 'Café des Chansons'. Leading arrangers such as Paul Prenen and Wijnand van Klaveren arranged some of the most beautiful French chansons around Charlotte’s own particular sound, anchoring it in a string quartet from the Netherlands Philharmonic Orchestra: the Tobalita String Quartet.

Singer Charlotte Haesen was born in Amsterdam in 1987. She has origins from France, The Netherlands and Burundi and grows up at the border between French speaking Belgium and The Nederlands. Later she studied jazz vocals at the Conservatory of Amsterdam. Known for being active in various musical genres, she has won the EuJazz Award, the public prize of the Dutch Alliance Française competition and received several awards for her videoclips. Being a uniquely versatile artist, Haesen has performed with different formations at festivals and clubs in over 15 countries worldwide.

Odile and Charlotte release their first album in 2017. It ends up nr. 5 in the Concerto Plato World Top 10 and Mania Magazine.

‘Charlotte sings in a beautifully authentic and intimate fashion.’ - NRC

‘The subtle worldly shades are priceless and give the soulful songs a colorful subtone. Haesen's voice is cristallyne and powerful’ - LIVE XS

‘And what about the singer Charlotte Haesen? She grew up in the Euregion – A future ray of hope for the Jazz from that region.’ - JAZZISM

’You can defenatly say that 'Salomé' was a very meritorious debut of a quirky and willful lady.’- Muziek from NL

‘The songs of Haesen are original, compact, exciting and melodious. - HET PAROOL

‘Charlotte Haesen enchants with her voice, timing and her wonderful performance. (...) she provides for goosebumps and unexpected tears. After the performance on Podium Witteman it is clear from the enthusiastic reviews that she can’t stay a public secret any longer.’ - UITZINNIG.NL