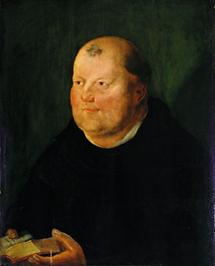 The Monk of Salzburg (German: Mönch von Salzburg) was a German composer of the late 14th century. He worked at the court of the Salzburg archbishop Pilgrim von Puchheim (1365–96) more than 100 Liederhandschriften (manuscripts) in Early New High German are attributed to him.

His name and monastic order is unknown; some of the introductions to the manuscript sources mention the names Herman, Johans, and Hanns and describe him as either Benedictine or Dominican. Despite this confusion, all the manuscripts that contain his works "agree that he was a learned monk who wrote sacred and secular songs".His compositions overcome the Minnesang traditions and even approached to recent polyphonic settings.