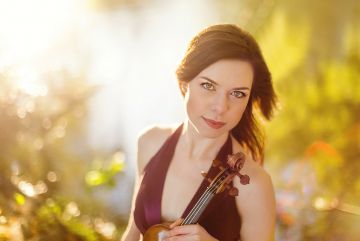 American violinist Tessa Lark is one of the most captivating artistic voices of our time. A budding superstar in the classical realm, she is also a highly acclaimed fiddler in the tradition of her native state of Kentucky.

Keeping in touch with her Kentucky roots, Lark performs and programmes bluegrass and Appalachian music regularly, and she collaborated with fiddler Mark O'Connor on his album MOC4, released in June 2014. She premièred her own Appalachian Fantasy as part of her Distinctive Débuts recital at Carnegie Hall, where she also gave the world prèmiere of Michael Torke’s Spoon Bread, written specifically for her stylistic capabilities.

Lark plays a c.1600 G.P. Maggini violin on loan from an anonymous donor through the Stradivari Society of Chicago.