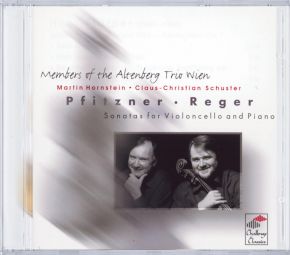 Sonatas for Violoncello and Piano

In a letter to Alexander Zemlinsky from 1922 Arnold Schönberg mentioned that the music of Max Reger should be performed more often. The reasons why were that he composed a lot of music and that although he was dead people still didn't have an opinion about him. Schönberg thought Reger was a genius. Schoenberg's Verein für musikalische Privataufführungen did put the monumental sonata for cello and piano opus 116 three times on the program. Max Reger composed his fourth cello sonata in A minor in 1910 and was proud of this sonata. With regard to the premiere in 1911 he wrote to Georg Stern: 'Did you hear my new cello sonata? I think that this radiant work will illuminate everybody. I would appreciate it if you look at it.'

Pfitzner's cello sonata in f sharp minor dates from 1890 and was completed two years after Brahms' Second Cello Sonata with which Pfitzner was certain familiar given that his teachers in Frankfurt were virtually all Brahmsians. Though the opus number is one, it is certainly not Pfitzner's first work. Many, without opus, preceded it. While the ideas within the sonata are highly original the influence of Brahms can be heard. But to be clear, Pfitzner's cello sonata, though sometimes called Brahms' third cello sonata, sounds no more like Brahms than Brahms' first symphony, which was called Beethoven's 10th, sounds like Beethoven. In four movements, it opens Sehr bewegt with lyrical expansive melodies. Particularly striking is Pfitzner's occasional  economy of expression---at one point the cello repeated plays but one note, and yet the effect is as if this were not the case. The second movement, Sehr langsam, begins quite slowly but gradually the tempo is increased to a very impressive dramatic climax. The third movement, So schnell als möglich, is a new kind of scurrying scherzo without trio. The finale, Nicht zu schnell, like the first movement is broad with expansive ideas. The fact that critics called this work Brahms' third cello sonata, is an indication of just how fine they regarded this important sonata.

The sonatas of Reger and Pfitzner are performed by cellist Martin Hornstein en pianist Claus-Christian Schuster. Both are members of the Altenberg Trio Wien.