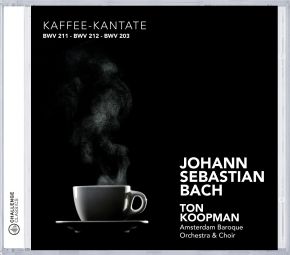 Bach composed these three secular cantatas at very different stages in his career and they were also performed in different venues. The Italian chamber cantata "Amore traditore" BWV 203, written ca.1720 in Cöthen for solo bass and concertato harpsichord, is an extraordinary showpiece for two outstanding virtuosos. The other two works, from Bach's Leipzig period, are both humorous in character. The so-called 'coffee cantata' BWV 211, ca.1734, was scored for three vocal soloists and a small chamber group of transverse flute, strings, and continuo. Well suited for a performance in a coffee house, it is also moral cantata because the little dramatic scene addresses the issue of excessive consumption of coffee, at the time a luxurious commodity. The 'peasant cantata' BWV 212, from 1742, is the last secular cantata known to have been composed by Bach. It was commissioned for a celebratory occasion at a country estate outside of the city of Leipzig. Subject is a serenade offered bythe peasant folks greeting their master, the new occupant of the mansion. It is scored for Soprano and Bass, horn, flute, strings, and continuo. The text is written in Upper Saxon dialect.

Renowned Bach specialist Ton Koopman (1944) was awarded the 2006 Bach Medal by the city of Leipzig 05 Jun 2006, the final day of this year's annual Leipzig Bach Festival.

The award honors the significant contribution of the 61-year-old Dutchman to Bach performance and scholarship. Koopman performed at the festival, which is run in conjunction with the Bach-Leipzig Archive, with the Amsterdam Baroque Orchestra.

He studied organ (Simon C. Jansen), harpsichord (Gustav Leonhardt) and musicology in Amsterdam and was awarded the Prix d'Excellence for both instruments. As an organist he has performed on the most prestigious historical instruments of Europe, and as a harpsichord player and conductor of his Amsterdam Baroque Orchestra (founded 1979) & Choir (1993) he has been a regular guest at venues which include the Concertgebouw in Amsterdam, the Theatre des Champs-Elysées in Paris, the Philharmonie in Munich, the Alte Oper in Frankfurt, the Lincoln Center in New York, and leading concert halls in Vienna, London, Berlin, Brussels, Sydney, Melbourne, Madrid, Rome, Salzburg, Tokyo and Osaka.

He recorded a.o. for Erato, Teldec, Sony, Philips and DGG. In 2003 he created Antoine Marchand, his own sub-label of Challenge Records. Here he publishes these Complete Bach Cantatas, as well as his other recent and future recordings. "Schweigt stille plaudert nicht" BWV 211

Hello, Will there be a DVD version of this _Coffee Cantata_ performance? Thanks.

What is the writer of the music note(CD booklet)?

What is the writer of the linear note?