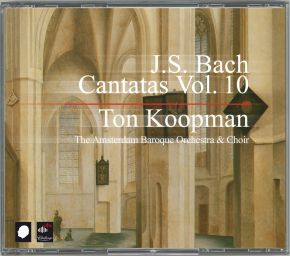 The tenth volume of the complete recording of Bach's cantatas contains a final group of works (BWV 44, 73, 119 and 134) from the first cycle of 1723-1724. It continues with the first of a substantial series of chorale cantatas that give the second Leipzig cycle of 1724-1725 its particular character. This volume ends with the serenata BWV 134a, which completes the secular cantatas in Volumes 1 to 3; it provided the musical model for the Easter cantata BWV 134, which was composed in 1724. Bach's commitment in composing this second cycle of cantatas went well beyond his undertaking in the previous year. Whereas in the first cycle, existing cantatas from the Weimar period could be found alongside new pieces, the second cycle contains a sequence of newly composed works that          continued uninterrupted until the spring of 1725.

Klaus Mertens (soloist)More information
20-11-2014 RONDO
""We hope that Koopman will tackle other composers with the same vigorous effort as he has Buxtehude, and are very happy that we now are able to enjoy the full scope of Buxtehude’s great oeuvre, which is undoubtedly superb music""