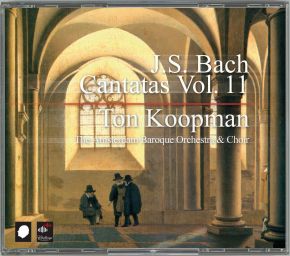 Previously begun on Erato, Koopman's cantata cycle was taken over and completed in 2007 on Challenge Classics. It now looks set to surpass the famous Leonhardt-Harnoncourt set on Teldec (and indeed most of his other competitors).

Koopman favours an intimate approach to the choruses - namely one voice to a part. Also, he opts for females soloists rather than boys, as would have been the case in Bach's day, and he favours mixed rather than solely male choirs. For many this will be a plus point, and it is good news for fans of Barbara Schlick. He goes for slightly higher than normal pitch - a semi-tone above present day pitch, which, as Christopher Wolff's notes point out, is what Bach used in Mühlhausen and Weimar, brightening the sonority quite a lot.

The singing in virtually all the cantatas is pretty impressive and the instrumental playing is of a very high order.

"Koopman's directing vitality keeps the music spontaneously alive, with no sense of over-refinement or scholarly rectitude; the recording is first class, and the documentation could hardly be more informative. In short, this is a more enjoyable and rewarding seriesthat will give much satisfaction" - Penguin Guide to Recorded Classical Music, 2008.