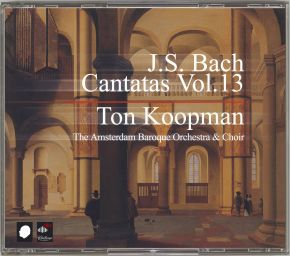 The present set is the debut of Ton Koopman on the Challenge Classics label and the re-start of the series of complete cantatas by Johann Sebastian Bach. Volume 13 in this CD presentation contains the third series of chorale cantatas from the second annual cycle Bach composed for Leipzig. Music criticism in the modern sense did not exist in the eighteenth century, so we do not really know anything about how the public responded to Bach's music. One of the few comments we have is in a newspaper report of Bach's first appearance in the capacity of Cantor of St Thomas's, presenting a cantata on 30 May 1723,but we learn only that it was received with approbation, even applause. There are no negative comments of any date,so we can assume that the reception of Bach's cantatas as a whole was good.While it is unlikely that anyone, even his own composition pupils, had any deeper understanding of Bach's art as represented in the cantata, and especially in the chorale cantata, yet the chorale cantatas seem to have been especially popular and not just with their composer. After his death, for instance, Anna Magdalena Bach sold the performance materials for them to St Thomas's School - clearly, they were prized. The fact that the chorale cantatas were based on wellknown hymn tunes very probably contributed to their popularity. They embody in a special form the 'intricate' style that Bach himself ascribed to his sacred cantatas: the unfolding of highly diverse formal structures, not confined to the often positively monumental opening choral movements. The range is enormous, from the backward-looking conservatism found in BWV 38 to the modern musical language of BWV 1. The arias,too,exploit a wide variety of formal options: solo, duet, trio, with obbligation all kinds of instruments, and with or without reference to the chorale melodies on which the cantatas are based. The recitatives show a similar willingness to experiment in regard to the inclusion of cantus firmus elements, going so far as to use a complete hymn tune as a continuo part in BWV 38.