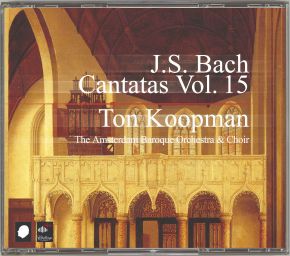 The cantatas in this fifteenth volume belong mostly to the transitional period between the second and the third yearly cycle of cantatas, i.e. the spring of 1725. BWV 3 is part of the series of chorale cantatas that give the second yearly cycle its special character, whereas BWV 28, 110, 146 and 168 already belong to the third yearly cycle. However, cantatas BWV 85, 87, 108, 128, 175, 176 and 183, mostly compositions on texts by Mariane von Ziegler, bring the second yearly cycle to its conclusion. Bach had taken up his position as Kantor of St Thomas's, Leipzig, at the end of May 1723 and so begun his regular performances of cantatas on the First Sunday after Trinity - in other words, in the middle of the church year. His order for the first year of cantatas therefore deviated from the traditional course of the church year, which began on the first Sunday of Advent and ended on the last Sunday after Trinity. This, however, had consequences for the ensuing cycles. Thus Bach no doubt had planned to conclude his yearly cycle of chorale cantatas of 1724-25 on Trinity Sunday 1725. He could not have foreseen that the loss of his librettist would force him to break off the series on 25 March. For Easter Sunday he was able to resort to a much earlier work, the chorale cantata "Christ lag in Todesbanden", BWV 4, especially as the Mühlhausen version needed little revision. For the period after Easter, however, he was forced to make other arrangements at short notice.