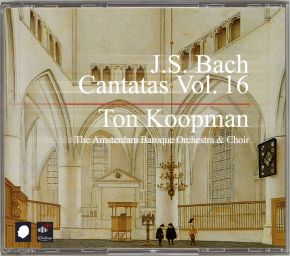 The cantatas in this sixteenth volume are all from the third cycle of Bach's Leipzig cantatas. This yearly cycle began on the First Sunday after Trinity (3 June) 1725 and extended over a period of about three years - unlike the two preceding cycles of 1723-24 and 1724-25. Bach's rhythm of composition had slowed down markedly in the middle of 1725. It is also significant that from February to September 1726 he performed a long series of cantatas by his cousin Johann Ludwig Bach (1677-1731), Kapellmeister at the ducal court of Meiningen. But even if the proportion of original compositions declined markedly, these include a series of particularly accomplished and extended works, such as Cantatas BWV 43, 39, 170 and 102. Musically, Bach's third yearly cycle of cantatas is distinguishable by the fact that they do not begin with large-scale instrumental symphonies, nor do they have unusually extended or richly scored opening movements.