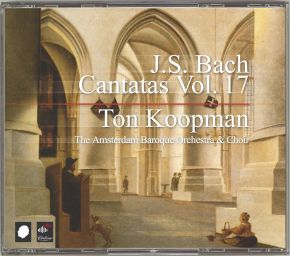 Among the text forms used in the third cycle we frequently encounter dialogue poems, usually based on a dialogue between Jesus and the Soul. Typical examples of this type of dialogue cantata are BWV 57 and 58. Features of the third-cycle cantatas include the use of lavish instrumental movements, among which are those with obbligato organ (as in BWV 35 and 169), and the division of the work into two parts. (as in BWV 17 and 35).

The Recording Dates shown in the Booklet refer to another Volume, not Vol 17. The recording dates for these Cantatas remain thus, a mystery.

The Recording Dates shown in the Booklet referred to another Volume, not Vol 17. The recording dates for these Cantatas remain thus, a mystery.