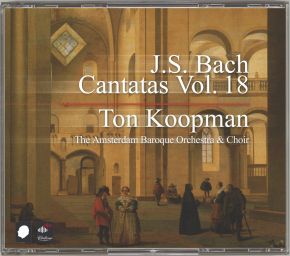 The 18th set of Bach's cantatas contains exclusively works of the third yearly cycle from Leipzig. Unlike the first two Leipzig yearly cycles, this one extends over a longer period: from June 1725 until 1727. The works in this set belong essentially to the years 1725-26 and are in some cases chronologically contiguous (BWV 187 and 45; BWV 98, 55, 52), with the result that the original sequence can be easily grasped.

An especially marked characteristic of the third yearly cycle is the incorporation of lavish instrumental movements. A typical example can be seen in BWV 52, which incorporates the opening movement of Brandenburg Concerto No. 1. A concertante organ part is also used often, though in this set it appears only as an obbligato instrument in the aria from BWV 47. With the new instrumental brilliance and lavishness that predominates in the third cycle, Bach broke new ground in his composition of cantatas and once again demonstrated his ambitions as a Kapellmeister.