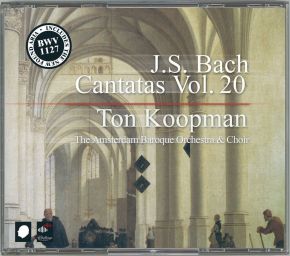 The cantatas of volume 20 combine the concluding items from the "Picander" year of 1728-29 with a series of cantatas from the first half of the 1730s. A special feature is the inclusion of a hitherto completely unknown sacred work from Bach’s Weimar period,          discovered as recently as May 2005 by Michael Maul (who works in the Bach-Archiv in Leipzig) in the Herzogin Anna Amalia Library, Weimar. This aria of praise dating from 1713, preserved in a newly discovered original source and now assigned the BWV number 1127, supplements Bach’s Weimar cantatas in a felicitous manner. Above all it is the first new work to add to Bach’s vocal output for 70 years, since the discovery of the cantata fragment “Bekennen will ich seinen Namen”, BWV 200.