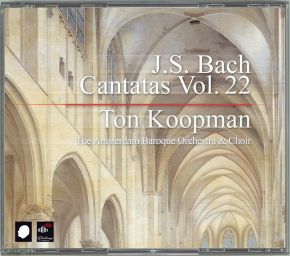 Between 1999 and 2004, Koopman, a conductor, musicologist, organist, and harpsichordist, recorded the complete cantatas by Johann Sebastian Bach with the Amsterdam Baroque Orchestra and Choir, which he founded in 1979.

This twenty-second and last volume of cantata recordings contains two of Bach's latest cantatas (BWV 30 and 80), including the secular model for BWV 30 and Wilhelm Friedemann Bach's arrangement of two movements from BWV 80 dating from after 1750. Also included are the four Kyrie-Gloria masses of the late 1730s; they are very closely associated with the cantata repertoire of the 1720s. These masses are based on selected movements of cantatas dating from the period 1723-6; after an interval of ten or so years Bach reworked them, in most cases very thoroughly.  Renowned Bach specialist Ton Koopman (1944) was awarded the 2006 Bach Medal by the city of Leipzig 05 Jun 2006, the final day of this year's annual Leipzig Bach Festival.

The award honors the significant contribution of the 61-year-old Dutchman to Bach performance and scholarship. Koopman performed at the festival, which is run in conjunction with the Bach-Leipzig Archive, with the Amsterdam Baroque Orchestra.

He studied organ (Simon C. Jansen), harpsichord (Gustav Leonhardt) and musicology in Amsterdam and was awarded the Prix d'Excellence for both instruments. As an organist he has performed on the most prestigious historical instruments of Europe, and as a harpsichord player and conductor of his Amsterdam Baroque Orchestra (founded 1979) & Choir (1993) he has been a regular guest at venues which include the Concertgebouw in Amsterdam, the Theatre des Champs-Elysees in Paris, the Philharmonie in Munich, the Alte Oper in Frankfurt, the Lincoln Center in New York, and leading concert halls in Vienna, London, Berlin, Brussels, Sydney, Melbourne, Madrid, Rome, Salzburg, Tokyo and Osaka.

He recorded a.o. for Erato, Teldec, Sony, Philips and DGG. In 2003 he created Antoine Marchand, his own sub-label of Challenge Records. Here he publishes these Complete Bach Cantatas, as well as his other recent and future recordings.