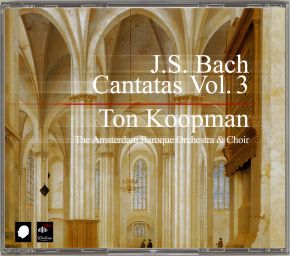 The third volume of our complete recording of Bach's cantatas comprises works drawn from three different categories. First comes a group of seven sacred cantatas from the years 1714-17, the majority of which were written for the Weimar Schloßkirche. Taken together with the cantatas contained in Volumes 1 and 2,these seven works - Cantatas 54,63,155, 161,162,163 and 165 - form the group of 23 sacred cantatas that have survived complete from the years leading up to the end of Bach's term of office as Konzertmeister to the Weimar court in 1717. The second category comprises Cantatas 22 and 23, the two works with which the composer - now Kapellmeister to the court of Cöthen - auditioned for the post of Thomaskantor in Leipzig in the spring of 1723 and which thus form the starting-point of the extended series of sacred cantatas that will be launched with Volume 6. The third and final category is made up of a single work, the hunting cantata BWV 208, which was written for a quest performance at the Weißenfels court in 1713. Like Cantatas 203 and 524 included in Volume 2, Cantata 208 is numbered among the secular works from Bach's pre-Leipzig period.