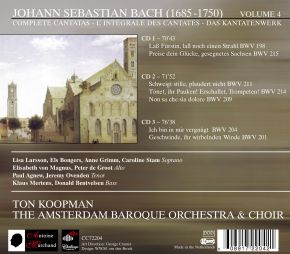 The fourth volume of our complete recording of Bach's cantatas completes the series of secular cantatas from the composer's years in Leipzig. Seven works are involved here, spanning a period from 1725 to1742, the year of Bach's final secular cantata, BWV 212. Of Bach's occasional compositions, some fifty secular pieces have survived, yet these represent no more than a fraction of what must once have existed. Bach's secular cantatas cover a period of almost exactly three decades. The first surviving evidence of such a work dates back to February 1713, when Bach visited Weißenfels as part of the official celebrations to mark the duke's birthday: his Hunting Cantata Was mir behagt, ist nur die muntre Jagd BWV 208 is believed to have been written for this occasion. Conversely, the latest record of Bach's creative activities in this particular field is afforded by his cantate burlesque, the Peasant Cantata BWV 212,of August 1742, although his drama per musica, Der Streit zwischen Phoebus und Pan BWV 201, is known to have been revived as late as 1749,in other words, the year before his death.