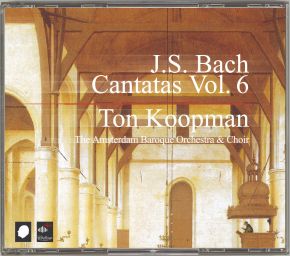 The sixth volume of our complete recording of Bach's cantatas inaugurates the long series of sacred cantatas written during the composer's years in Leipzig. With a single exception, the cantatas included in the present release belong to the first annual cycle and date from 1723/24.The cycle begins with Cantatas 75 and 76, with which the recently installed Thomaskantor took up his new appointment in April 1723. They date, respectively, from the end of May and beginning of June 1723.The last of the works to be included here is Cantata 69,a revised version of BWV 69a.It dates from towards the end of its composer's life. The cantatas included in the present release afford on impressive, if provisional, insight into the prodigious musical riches that Bach lavished on his sacred music for Leipzig's Thomaskirche and Nikolaikirche during his twenty-seven years as Kantor and director musices.