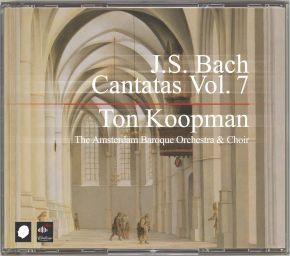 This seventh volume of the complete cantatas is exclusively given over to works from the first cycle of Leipzig cantatas of 1723/24. When Bach became Thomaskantor in Leipzig, he knew that he was taking on a post that was one of the richest in tradition and most important in the sphere of church music in Protestant Germany. From the latter part of the 17th century on, the cantata came to replace the Gospel motet, which had been used in church services in Protestant Germany since the time of the Reformation to underline the content of the prescribed reading from the Gospel. As the corresponding musical settings of these scriptural texts had often been planned us collections for the whole church year (for example by the composers Melchior Franck and Andreas Hammerschmidt), so there later grew up a tradition of composing cantatas in annual cycles, that is, in a series that covered the whole of the church year. So it was that Bach, on assuming his new functions, proceeded to create a repertoire for several annual cycles, which would meet his long term needs for church music.