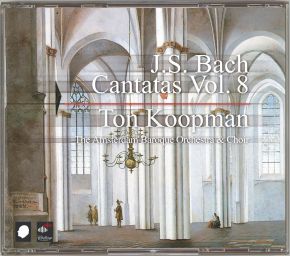 Like its two predecessors, the eighth volume of our complete recording of Bach's cantatas is devoted to the first annual cyle of Leipzig cantatas of 1723/24. In planning and implementing this cycle, Bach took upon himself a burden of work far in excess of anything he had          earlier assumed — to say nothing of the creative and artistic challenges involved. Whereas his Weimar cantatas of 1714-16 had been written at regular monthly intervals, he now had four times as much work on his hands. In the circumstances, it is entirely understandable that, whenever possible, he fell back on existing works, especially those written in Weimar, although pieces composed were no less liable to be pillaged. These self-borrowings notwithstanding, the main emphasis none the less lay on the composition          of new works, and the first cycle of cantatas that Bach wrote for Leipzig is notable for the number of new pieces that it contains.