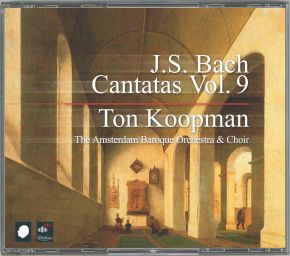 The ninth volume of this complete recording of Bach’s cantatas continues the series of cantatas from the first Leipzig cycle. Cantata 173a is the sole exception: a secular cantata composed by Bach at Cöthen, it was reworked as a church cantata (BWV 173) for the          first Leipzig cycle and is included in Volume 7 (CD 3). BWV 66 is also based on an original work from Bach’s Cöthen period.
With the cantatas he composed during his first year at Leipzig, Bach not only created an astonishingly prolific and rich repertoire but also, by applying himself with such concentration to the cantata genre, provided himself with an unprecedented wealth of musical forms free of any schematic approach.

Most of Bach’s Leipzig cantatas are framed by a large-scale opening chorus on a biblical text (they rarely begin with a solo piece) and a simple, four-part closing chorale. The orchestra is considerably bigger than at Weimar. More use is made of brass instruments, especially trumpet and horn; the flute appears more and more frequently from the Spring of 1724 and is later supplemented by oboe da caccia and other instruments. The instrumental writing is noticeably more virtuoso, while the melismatic quality of the word setting is further developed.