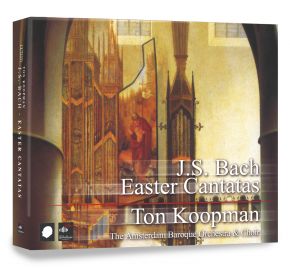 This CD-box gives a full reproduction -with exception of the Passion - of the musical program Bach offered in 1724, starting from March 24 (Annunciation) until April 11 (Third Easterday). This was Bach's first year as Thomaskantor in Leipzig.

The two cd's show us the master's very differentiated Cantata-style from his early years until after 1725. Examples of later works are his Cantata BWV 6, a genuine work from his Leipzig-period and composed in 1725. Cantatas BWV 145 and 158 were written in the years after that. Ton Koopman and his choir are as differentiated in their performances as Bach in his composing: clear and bright in the chorales and in contrapuntal choirs really articulate and outstanding. But that are just a few superlatives which can be used for an album such as this! This Easter you can enjoy this wonderful album with Koopman, hist choir and orchestra and of course the best of solists!