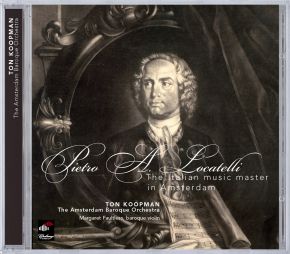 The works on this compact disc give a good overall idea of Locatelli's oeuvre which, consisting of instrumental music alone, is          small and compact. His Concerti Grossi Opus 1, published in 1721, are entirely modelled along the lines of Corelli's Concerti Opus 6. Parallel to this work, Locatelli's eighth concerto is a Concerto fatto per la notte di Natale (i.e. a Christmas concerto) which ends with a pastorale in six-eight metre, evoking the feel of Christmas.

His Sonates Opus 2 (composed in 1732) give the impression of a totally different composer at work. This galant flute music far removed from Corelli's Baroque counterpoint. The Menuet from the tenth sonata, an organ version of which is played here, is a virtuoso series of variations on a simple theme. This compositional form is reminiscent of chamber music at the court of Frederic the Great. Johann Joachim Quantz, flautist to that court, was extremely complimentary about Locatelli in general, and about these flute sonatas in particular. Opus 4 (composed in1735), comprises six Introduzioni Teatrali and six Concerti Grossi. The Introduzioni are short, three-movement sinfonias in the style of works by Neapolitan Opera Buffa composers. These sinfonias, however, are not followed by an opera. How regrettable it is that Locatelli composed nothing for the voice is demonstrated by Concerto Grosso Opus 7 no. 6, Il Pianto d'Arianna, published in 1741: this concerto is in fact an instrumental cantata in which the role of Arianna is taken not by a voice but rather a solo violin. Locatelli hints at vocal music by using the kind of motives common to cantata recitatives. The work's continual mood changes give it the true character of a cantata, though one lacking a vocal part.