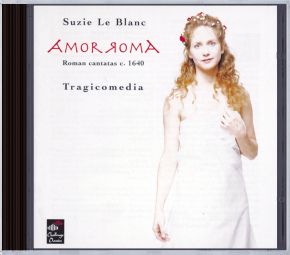 From Rome to Paris

A splendid and highly decorated manuscript now in the Biblothèque Nationale, Paris, is the repository of the best of Roman vocal music from the middle of the 17th century. The precise origins of the manuscript are unknown. It would seem to have been compiled at the behest of Ottaviano Castelli, a man of letters close to the circle of the Barberinis. Castelli wished to thank Cardinal Richelieu for selling him the office of postmaster to the King of France; the gift would have been delivered to the cardinal by Mazarin, who was in constant contact with Castelli.
The manuscript, in two volumes bound together in red leather with gold tooling, contains an anthology of cantatas and arias by the most noted Roman composers of the 1630s, the period in which the cantata attained its full maturity at the hands of Luigi Rossi and Giacomo Carissimi. The book contains around 100 pieces, mostly for soprano and continuo, with a few for two or three voices. Today the great interest of this collection is to present, alongside Rossi and Carissimi, important composers such as Mario Savioni, Marco Marazzoli, Virgilio Mazzochi and Orazio Michi, who all occupied presigious positions in the musical life of Rome, als well as lesser-known composers such as Pietro Paulo Vannino Carlo Caproli and Carlo Eustachio.

Luigi Rossi (c.1597-1653) was born at Torre Maggiore and arrived in Rome around 1620. Antonio Barberini, ardent patron of the arts and nephew of Pope Urban VIII, employed him in 1641. Invited by Mazarin to provide an opera for Paris, he composed Orfeo, to a libretto by Francesco Buti. As well as several operas and oratorios, he wrote at least 300 cantatas, in a wide variety of styles, while never sacrificing expression to technical virtuosity. The five pieces here by Rossi demonstrate the scope of his inspiration and creativity. Un ferito cavaliero, on a text by Fabio della Corgna, is a lament on the death of Gustav Adolf , King of Sweden, who fell at the battle of Lützen in 1632. This piece was known throughout Europe and even became the object of a contrafactum on a religious subject evoking the death of Christ. In one of Rossi's most moving achievements, the devasted Queen of Sweden expresses her grief in a highly dramatic style of recitative.

Giacomo Carissimi (1605-1674) occupied a central and prestigious role in Roman musical life. He was maestro di capella at the Collegio Germanico, and also responsible for the music at S. Apollinaire, the church attached to the college. His favoured form was the composite cantata ("cantata a più parte"), which comprised sections in a variety of styles (recitative, arioso, aria). He also composed strophic arias and pieces in declamatory style, such as the Piangete aure, piangete here, a long lament on a text by Domenico Benigni, one of the principal poets of the collection.

Virgilio Mazzocchi (1597-1640) trained first for the priesthood, but after receiving minor orders in 1614 decided to decicate himself to music. Successively maestro di capella at some of the most important churches in Rome, he devoted a good part of his life to the teaching of music and composition, but also made a considerable contribution to the musical repertoire. His output extends from sacred music to opera, not to mention many secular cantatas. On a text by Giulio Rospigliosi, the future Pope Clement IX, the cantata Sdegno campion audace is in praise of disdain; it alternates passages of recitative with melodic sequences based on the ciacona.

Orazio Michi (c.1594-1641), often called Horatio del Arpa, owed his considerable fame to his virtuosic harp playing. It was greatly admired in the salons of the noble Roman families, particularly those of the cardinals Montalto, Maurice de Savoie and Antonio Barberini. He must also have enjoyed a fine reputation as a composer, for his name appears alongside some of the most celebrated authors in the 1640 collection Raccolta d'arie spirituali. Some 60 of his cantatas for solo voice and continuo survive, and they are among the most beautiful of that period. All Michi's cantatas are on spiritual and moral texts. The only piece of his in the Paris manuscript is a conzona in two strophes, Spera mi disse amore, to a text by Domenico Benigni.

Carlo Caproli (1615-20 tot 1692-95) was a composer, organist and virtuoso violinist (whence his nickname: Carlo del Violino). He served in Rome in a number of musical capellas, including that of Prince Ludovisi, and like Marazzoli and Rossi before him was honoured at the French court, where he was sumptuously received in 1653-4 during the preparation and presentation of his opera Le nozze di Peleo di Theti to a libretto by Francesco Buti; for this he received the title Maître de la Musique du Cabinet du Roy from Louis XIV. The two cantatas here are sufficient proof of his abundant talent. The first, Frondosi e verdi boschi, is in the composite cantata genre and alternates recitative and aria sections. The text is by Andrea Barbazza, a member of the Accademia degli Humoristi. In the second piece, Di sue belleza altera, the story of a beautiful nymph on the banks of the Tiber is narrated in recitative and arioso styles: we hear the nymph herself singing to the river when she breaks into an aria with a refrain which Caproli calls "estreviglio". This refrain technique is reminiscent of the refrains in the contemporary Spanish villancico, and indeed Caproli use of the term demonstrates that is a conscious borrowing on his part.

The other composers are much less wel known today, although the inclusion of their works in this collection next to international successes such as Rossi's Un ferito cavaliero indicates that they were highly regarded at the time. There is virtually no information about the life of Carlo Eustachio, who composed both the text and music of his cantatas. From the seven included in the manuscript we have chose Fiumicello che con l'onda, a gentle strophic aria over a passaclia-like bass in which a disapointed lover confesses his amorous pains to a little stream. Other pieces in the collection remain anonymous. S'io son pazzo, to words by Monsignor Stefano Vai, is a rollicking dance song with a comic text close in spirit to the commedia dell'arte.

Before achieving a stable structure at the end of the 17th century, principally through the works of the Neapolitan school, the cantata went through a mid-century development in Rome characterized by a remarkable formal freedom. Despite its modest means (usually a solo voice and continuo), this open and experimental genre allowed an infinite variety of atmosphere and became the vehicle of choice for the best poets and musicians to express every nuance of love's passions. For a number of reasons, there was a particularly vibrant exchange of ideas, musical and otherwise, between Rome and Paris in the first half of the 17th century. As a result, despite the strong affirmation of national character in the French "grand siècle", there can be no denying its deep roots in the soil of the Italian Baroque. One need look no further than the career of Jean Baptiste Lully (Giovanni Battista Lulli) for a confirmation of this. It is impossible to know what value Richeliu attached to Castelli's gift, but the presence in France of this beautiful manuscript bears vital witness to the strong ties, both artistic and political, which bound Rome and Paris at that time.