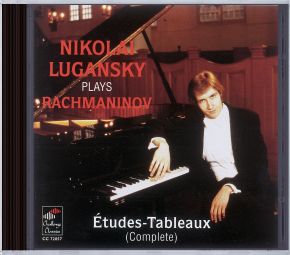 In 1911 Rachmaninov reverts to the genre of piano miniature. He creates his famous cycle Études-Tableaux op. 33, unprecedented in piano music. The name, which remains unique in the history of music, came naturally to Rachmaninov, since many of his works are inspired by visual images. ‘Études’ suggests the virtuosity of  Rachmaninov’s pianistic art.

In contrast to the Preludes and Moments Musicaux that usually reflect fleeting changes of the composer’s inner world, the Études-Tableaux create epic symbolic images which add up to make a grandiose ‘Tableau de Russe’. Written before the cataclysm which was to transform Russia, they were imbued with the very essence of Russia, from folklore tales to ascetic clerical culture.

The Études-Tableaux op. 39 (1916) is the last Rachmaninov’s work written in Russia. The whole cycle, conceived on a larger scale than op. 33, was performed for the first time in February 1917, the last days of the Russian empire. The coming events cast their sinister shadows over this composition. Eight pieces of nine are written in minor.