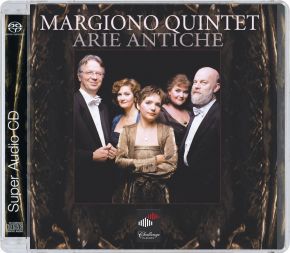 Artist: Charlotte Margiono, Marijn Mijnders, Susanne Jaspers, Gert Jan Leuverink, Yke Viersen Arie Antiche (Ancient Airs)
Works include - Alessandro Scarlatti: Le violette; Se Florindo e fedele; O cessate di piagarmi. Legrenzio Ciampi: Nina.Antonio Lotti: Pur dicesti o bocca bella; Giulio Caccini: Amarilli mia bella. Benedetto Marcello: Il mio ben foco. Domenico Scarlatti: Care luci del ben mio.
Arie antiche' was the title of a collection published by the Italian musicologist and editor Alessandro Parisotti in 1885.All but a handful of the arias on this disc can be found in Parisotti's collection. The main point of interest in the selection is, of course, the music's period. In title and in essence, this is an early-music collection before the term had even been thought of. Each item on this disc is characteristic of its period. It may be said that Parisotti's collections helped bring about a new taste for such music that has only truly flowered in our own time.
Previously released as an ordinary CD (CC72100), this beautiful music and it's performers deserve to appear on the best format of our own time...: SACD. The quintet excists of four musicians of the Royal Concertgebouw Orchestra Amsterdam and the fabulous soprano Charlotte Margiono.