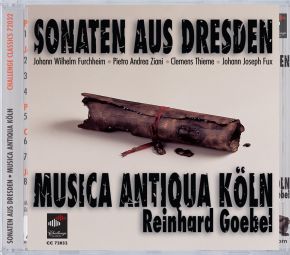 Dresden’s image as the fosterer of a musical golden age during the 18th century is assured, today more than ever, thanks to the almost perfect preservation of the music of that period. So far as the 17th century is concerned, however, the picture is much bleaker: the bombardment of the town by Friedrich II of Brandenburg- Prussia (during the Seven Years’ War in 1760), destroyed not only the residence of Johann Adolf Hasse (whom Friedrich admired passionately), along with the engravings for the planned complete edition of his works by the Leipzig publisher Breitkopf, but also the archive in which a selection of the music of the court chapel was stored. Heinrich Schütz’s opera Dafne, his reworking of Monteverdi’s Il combattimento di Tancredi e Clorinda, together with all Schütz’s unpublished occasional works and those of his contemporaries and successors, were consumednby flames. Only manuscripts which happened to be absent from the archive or which had been copied prior to 9 being sent to other music-loving courts have not irrevocably lost.

The largest remnants of the Dresden repertory are undoubtedly those preserved in Uppsala, Sweden: here, after 1650, the musicians Andreas and Gustav Düben compiled a collection that was in keeping with the imperial claims of the Swedish crown; the manuscript part of the collection preserves works by composers from Rome, Venice, Vienna, Dresden and Lübeck, almost all of them unica. The survival of these works in Sweden is mainly due to the fact that the Swedes were eagerly embroiled in every European war until 1720 (the death of Charles XII), but no one thought of giving the Swedes a taste of their own medicine in their own country.