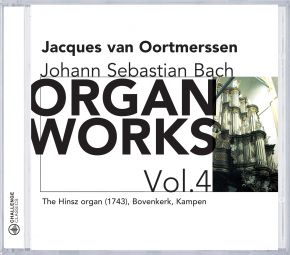 Although Bach was not occupied exclusively as an organist, his name and his works are clearly associated with the organ. He was acquainted with the instrument from his earliest years. After the death of his parents, ca.1795, he lived with his elder brother, Johann Christoph, the organist of Ohrdruf, and his family, and from 1700-2 he was a pupil at the Michaelis School in Lüneburg, where he probably came into contact with Georg Böhm (organist of St Johannis) and with the organbuilder Johann Balthasar Held (a pupil of the famous Arp Schnitger). From Lüneburg he journied to Hamburg where he heard Johann Adam Reincken (organist of St Catherinen) play. At the end of 1705 Bach travelled on foot to Lübeck to hear Dietrich Buxtehude, the renowned organist, play; he remained there for three months! Bach received his first appointment in 1703 at St Bonifacius in Arnstadt, and his nomination to the organistship (which included duties as a church musician) of St. Blasius, Mühlhausen followed in 1707. From 1708 to 1717 Bach was employed as the court organist at Weimar, where he wrote the majority of his works for organ. Subsequently he served as Kapellmeister to the court at Cöthen (1717-23). In his capacity as Kapellmeister he was expected to write church cantatas for specific occasions. Although it is uncertain whether Bach had to fulfil duties as an organist, various organ works date from this period. His last appointment was as Kantor at St. Thomas's Church, Leipzig (1723-50). There he was responsible for the church's music (both as composer and director), but, as at Cöthen, there was no specific task for him as an organist; this seemed to be no obstacle to his composing numerous works for the instrument. In earlier centuries it was the norm for composers to write functional music. Bach was no exception to this. Not only the chorale- based works, clearly written for specific times in the Church Year, but also most of the 'free' organ works can be accorded a place in the liturgy.