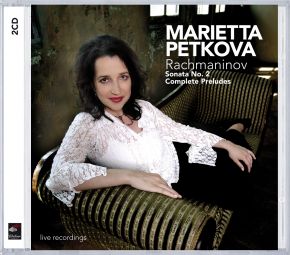 Rachmaninov (Russia, 1873 - Los Angeles, US, 1943) wrote almost all of his major works between 1901 and 1917. In the same period, Schönberg, Stravinsky, Bartók and Hindemith were paving the way for entirely new musical goals. Rachmaninov was one of the last romantics, a stranger in his time. But for piano music and playing, Rachmaninov was an innovator and a revolutionary. One of the greatest pianists of his time, he created a new way of playing the piano. An entirely new 'symphonic' concept of piano music was born. He was, perhaps, the first to exploit the fabulous percussion possibilities of the instrument to the full, to create intense effects of expression and colour.
With his Second Sonata opus 36, Rachmaninov wrote a masterpiece that is still relatively unknown among the general public. At the time, the composer was obsessed with the carillons of Russian Orthodox churches, which he incorporated impressively into the sonata. In 1931, Rachmaninov modified the sonata. The Preludes opus 3 (1892), opus 23 (1901-04) and opus 32 (1910) all contain characteristics of Rachmaninov's more popular style, with an abundance of memorable melodies and a unique combination of endearing, deceptively simple harmonies and complex chromaticism. Marietta Petkova (b. 1968, Bulgaria) won the Grand Prix of the 1978 National Piano Competition. She graduated from the local conservatory in 1986 with the school's Gold Medal, spent a year at the Music Academy Sofia, studying with Lili Atanassova and Gina Tabakova, and two years at the Hochschule für Musik und Darstellende Kunst in Vienna, under Paul Badura-Skoda. In 1989/90 she was Resident Artist at The Banff Centre for the Arts in Canada. In 1990 she decided to live in Amsterdam, The Netherlands, where she studied with Jan Wijn at the Sweelinck Conservatorium, graduating in 1994 with the highest possible distinction. Since 1989, she took lessons with György Sebök (1922-1999), who turned out to be an invaluable source of inspiration for her. She won prizes in prizes in Italy, Czechoslovakia , Bulgaria, Portugal, Austria, Switzerland and The Netherlands. In 1993 she was awarded the prestigious title Lauréate Juventus in France. She is Steinway Artist. For her CD's, she prefers the authenticity of live recordings to studio work.
Spiritual profoundness, virtuosity and versatility seem to have melted together into veritable artistry, received with open arms by press and public. She performs all over Europe, in Northern America, and in Japan, mostly with solorecitals and as a soloist with renowned orchestras, but also as a beloved chamber musician.