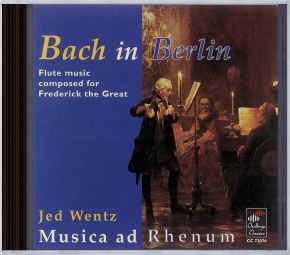 Flute music for Frederick the Great performed on period instruments

The court of Frederick the Great in Berlin was one of the major centres of enlightened musical taste in Europe. At court it was the king’s flute and Italian opera that were in the spotlight, and much like all other issues of courtly life Frederick set the tone in musical matters.

Frederick was able to push through his own individual taste. The chief aim of this style was to achieve le chant noble (noble chanting). This particular style dominated both operatic music and instrumental music performed at court, to which some of the major composers of the mid-eighteenth century contributed: the Graun and Benda brothers, Quantz, Carl Philipp Emanuel Bach, Janitsch and Agricola. On this recording Musica Ad Rhenum performs flute music by some of these composers, written for Frederick the Great.

Musica Ad Rhenum was founded in 1991 by a group of enthusiastic young musicians specialized in the performance of 17th- and 18th-century music on period instruments. The group’s name reflects the determination of its members to combine the latest musicological research and playing styles associated with the Rhenish cities Basel and Cologne with their own vision of authentic Baroque performance practice. The emsemble’s emphasis on musicological research, however, does not exclude the element of personal expression from their playing style.