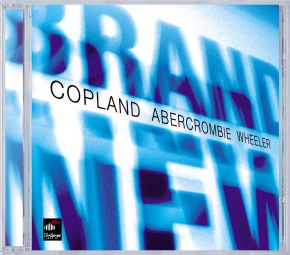 The second release of this marvelous trio. Each of these men are well established leaders in their own right. Kenny Wheeler, giant of European Jazz, composer, truly original improviser, with an individual sound and approach to music that will enter your soul instantly; John Abercrombie, a remarkable guitarist, well known for his collaborations with Dave Holland and Jack DeJohnette, known for his work as a leader since many years, but also known from groups with Charles Lloyd and many others. The pianist that initiated the trio: Marc Copland, one of the real poets of the instrument. These three men created a transparent music that balances on the edge, that is strong at some times, vulnerable at other moments; many times surprising, mostly lyrical, often melancholy, but always real. The linear, counterpoint approach is strengthened by the absence of bass and drums. Three instruments, weaving their lines together into an intricate patchwork of golden melodies.
This time, producer Hein Van de Geyn took the band into a lovely little church in Tilburg (Holland). Here they found the right atmosphere, a truly exceptional Steinway, and the acoustics to record the music in the best way. During two relaxed, yet intense days the music was put down on tape and was later mixed in the excellent studio LeRoy in Amsterdam. Similar to the first recording of the trio, we have a repertoire that gives us compositions of all three players, and a very special rendition of Nat Adderley’s famous song “Work Song” as well as one tune from the standard repertoire: “Taking A Chance On Love”. A magic band, a magic recording. Marc Copland - piano
John Abercrombie - guitar
Kenny Wheeler – trumpet, flugelhorn