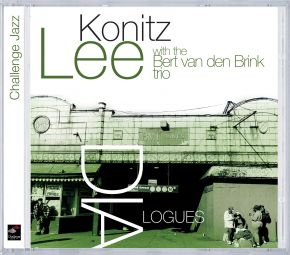 Lee Konitz, as all great improvisers, has a very personal voice. In 1997, short after his 70th birthday and 50 years after his first recording, this album was recorded.
It contains seven standards that Konitz has been involved with most of his artistic life, but all of them sound so freshly considered, that a reissue was a must. 'Lover Man', for example, gets a novel treatment by trio (minus drums) as a waltz, and 'Thinging' (Konitz's line on 'All the Things You Are') has a mid-chorus modulation that makes us hear these familiar harmonies in a new way. 'Cherokee' gets a more thoughtful rendition than we're accustomed to . And hear Lee's unaccompanied opening to 'Yesterdays', an example of Konitz at his most haunting. 'Moonlight in Vermont' receives an almost-martial duo (alto saxophone and piano) performance. Both 'East of the Sun' and 'You Could See Me Now' are straight-ahead, but hardly routine, quartet outings. Of a more unusual nature is 'Kojo No Tsuki', which has an appropriately Asian flavor. 'Dialogues' is a free improvisation by the foursome that has all of the logic one expects from Konitz and his cohorts.

Quotes:
(-) There a spontaneous, smoldering combustion and consistency the Van den Brink trio provides him (Konitz) that cannot be denied. It's quite a pleasurable listening experience, and another high watermark in the continuing career of one of the jazz world's premier icons.
(Michael G. Nastos, All Music Guide)

If you can find DIALOGUES (-) of Lee Konitz, you will always be in the moment with a good mix of what his music has represented for the past 50 years. It is a rarity in 2001 to witness an artist inspired by something he had done in 1949. What is more, Lee Konitz has successfully made a career largely based on intuition. Konitz goes inside the music, challenging listener and artist alike. Lee Konitz makes the avant-garde an accessible standard music and the standard far from expected.
(Jeffrey Hayden Shurdut, All About Jazz)

Lee Konitz (1927) is one of the most influential alto saxophonists in the early development of modern jazz. He incorporated many of the harmonic ideas of Charlie Parker into his playing. Konitz grew up in Chicago and played in the influential Claude Thornhill band, was member of Miles Davis' Birth of the Cool-nonet and he is regarded as one of the architects of 'cool' playing. In 1949 he joined Lennie Tristano and experimented in free jazz with pianist Paul Bley. After a period in Stan Kenton's band in the early 1950s he continued to excel in all sizes of ensemble, but his most original and challenging work has been in duos, trios and quartets, particularly his regular pairing with pianist Harold Danko. Since the mid-1960s , Konitz has lived and worked in Europe.
Bert van den Brink trio give a first-rate account of themselves, both on their own and in support of Konitz.The trio's ballad feature, 'Spring Fever', is a treat. Bert van den Brink - with a classical background - is a self-taught jazzpianist. He has a remarkably ripe piano style, rich in lyricism and harmonic sophistication. One hears echoes of Lennie Tristano in his solo version of 'I Love You'. Hein Van de Geyn is one of the most distinguished European bassists to emerge in this decade, and both he and his rhythm partner, drummer Hans van Oosterhout, are alert and creative listeners.