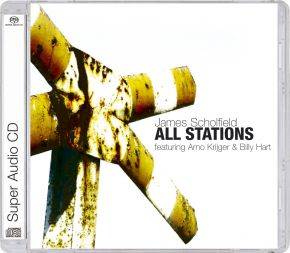 Artist: James Scholfield, Arno Krijger, Billy Hart James Scholfield is born in Manchester, England and moved to South Africa in his childhood. After playing in all kind of different bands he was bitten by the Jazz-bug. That made him decide to study at the excellent Jazz scholl in Graz, Austria for several years, but South Africa eventually pulled him back. In Cape Town he met Dutch producer/bassplayer Hein Van de Geyn, who was visiting South Africa at that time. Hein immediately was impressed, not only by his excellent playing, but also by his prolific compositions. As you will hear yourself James' music has a very personal signature, deeply rooted in the tradition, hints of the Cape, on the edge and above all original. Not too long after hearing James' demo Hein bumped into Dutch hammond player Arno Krijger and he immediately realised that he should get these two wonderful musicians together at some point. The only thing they missed (according to Hein) was a great drummer. In his mind it couldn't be anybody else than the amazing, exciting Billy Hart. And if it had to be, Billy was up to it and even better, going to be on tour. So now they had a tour and the possibility to record. The result of their wonderful week, of great music and good food can be heard on this CD. It's strong, potent, gentle, sensitive, grooving, original, accesible and creative. And on top of all that recorded in the SACD format, which gives this music even more intensivety then a normal recording would do. So listen and enjoy!