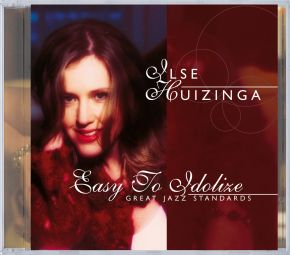 On Ilse Huizinga's second album for Daybreak she once again returns to the American theatre song she so much favours and masters, as previously and convincingly so shown on ÔThe Sweetest Sounds', devoted to the music of Richard Rogers. ÔEasy to Idolize' is another proof of her great vocal abilities, even emphasizing the already unequalled qualities of men such as Kern, Arlen or Porter, who by now are beginning to find recognition as true 20th century Ôclassical' composers. Ilse Huizinga has studied singing since age 17. After obtaining her degree in management at the University of Amsterdam, she studied at the Amsterdam Sweelinck Conservatory. Ilse made appearances in England, France, Turkey and Spain and performed on Dutch radio and TV. Her album ÔThe Sweetest Sounds' got airplay on various European radio stations and was nominated for an Edison ÔVocal Jazz' (the Dutch Grammy) in 2001. As Ilse's accompanists we have selected again some of the finest jazz musicians from the Netherlands, including husband-pianist Erik van der Luijt who, as usual, took care of all the arranging. Furthermore, there is the wonderful Martijn van Iterson, a guitar player who is finally beginning to receive the recognition he deserves. Frans van der Hoeven has been much in demand for many years now and is considered one of Europe's outstanding bassists. Drummer Ben Schröder adds just the necessary spirit and drive the music requires. Being on the scene for some considerable time now, he also is a talent Ôdeserving wider recognition'.