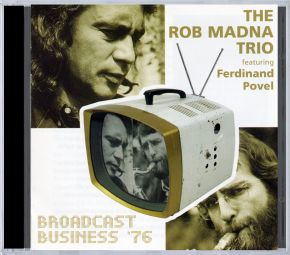 Dutch pianist and composer Rob Madna is considered one of the founders of modern jazz in postwar Holland. He was born June 8, 1931 and recently passed away, on April 5, 2003. In 1955 he recorded for the first time, participating in the anthologies 'Jazz From Holland' and 'Jazz Behind the Dikes'. Among his more recent recordings are the 1996 CD 'Update', with his trio and The Dutch Jazz Orchestra, followed by a 2000 live recording issued in the Daybreak piano series 'En Blanc Et Noir'. In his long career Rob Madna played with luminaries such as Phil Woods,Dexter Gordon,Don Byas,Lucky Thompson and Freddie Hubbard. Rob Madna's greatest model was Miles Davis, Thad Jones being another particular inspiration. During the 2003 North Sea Jazz Festival he posthumously received the prestigious Bird Award for his complete works.
This CD of the Rob Madna Trio with saxophonist Ferdinand Povel, features a radio appearance in 1976, made at the famous Nick Vollebregt Café in Laren (Holland), where over the years numerous recordings for broadcast purposes have taken place. 'Broadcast Business '76' is no memorial album: it has been in preparation for some time. The album contains a few compositions from Madna's '70s repertoire, like Billy Strayhorn's 'U.M.M.G.' and Thad Jones' 'Quietude', which the trio recorded for the LP 'I got it Bad...'only a few weeks after the radio date. The great Ferdinand Povel, who is also present in four tracks, contributes two pieces: 'In an Aquarian Mood' and 'Pori'. We are convinced that you will enjoy this impressive album.