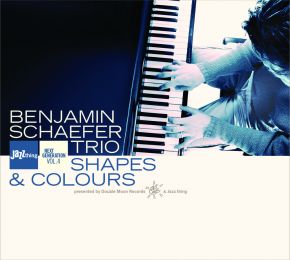 Artist: Benjamin Schaefer, Robert Landfermann, Marcus Rieck "Shapes And Colours" contains compositions exclusively by the young pianist and presents a complete range of songs from peaceful, ballad-like numbers ("Reincarnation", "Timanfaya") to Brazilian influenced ("Progeny") and up-tempo pieces ("Twelve in a Row"). "McIgor" has a very varied rhythm and almost has the character of a really catchy tune. In other words, listen and feel good... Benjamin Schaefer, who grew up in Braunschweig, already had piano lessons on a regular basis when he was only six years old. He has his parents, who considered him musically gifted, to thank for encouraging him fully at an early age, not only in playing an instrument but also at a church choir school. He discovered jazz when he was still a youth and immediately began to take lessons in it. These early experiences with music resulted in this "next generation" act (the youngest till now) already sounding amazingly mature at the mere age of 23.And he not only has his strengths in interpretation, but especially in composition and arrangement too. Today, Benjamin is studying at the Cologne Music College. He got to know his trio partners there, with whom he has already played regularly for three years - something that can be clearly heard on this recording. Robert Landfermann (bass) and Marcus Rieck (drums) accompany the pianist with an almost uncanny instinct through the most complicated arrangements. This is not only the result of their long years of collaboration, but is especially thanks to Benjamin's conviction that a trio must be composed of three partners with equal standards and rights to present a harmonious result.

Thank you, the right cover has now been uploaded