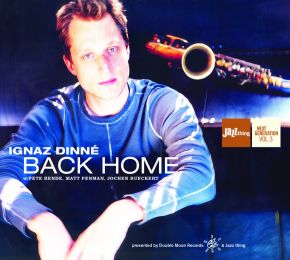 Having a renowned musician as a father can be a burden and a chance. For Ignaz Dinné, it was unmistakably the latter. Born in 1971 in Bremen as son of the well known trombonist and pianist Ed Kröger, he was able to gain comprehensive experience in music not only in the quintet of his father, but also soon after in Herbolzheim's "BuJazzO". He went to the US in 1993, where he began studies at the famous "Berklee College of Music." In 1996, he was even able to tour with the Thelonious Monk Ensemble in Asia. The guest musicians in the ensembles included - among others - Herbie Hancock and Wayne Shorter! Over the past years, Ignaz Dinné lived in New York and worked regularly with groups such as the Ron Carter Quintet and the T.S. Monk Sextet, Ignaz Dinné has been "Back Home" once again since this year. He took up residence in Berlin a short while ago and would like to continue his career in Germany. He presents numerous of his own pieces on his debut CD, but also dares to play classics such as "Body And Soul", which he gives his own, unmistakable sound. Ignaz Dinné already has his own, at times unwieldy, at times honeyed sound, which clearly distinguishes him from all known fellow saxophonists. His intensive work with Thelonious Monk has clearly sunk in deeply here, not only in the compositions, but also in expression and phrasing. You sometimes think that if Monk had played alto sax, he would have sounded just like this. Dinné is accompanied on "Back Home" by the New Yorker pianist Pete Rende, who contributed the captivating composition "Free Pete". The New Zealand bassist Matt Penman is well known in Germany, among other things, through his work with Wolfgang Muthspiel, Ravi Coltrane, Kenny Werner and Dave Liebman. Jochen Rueckert completes the quartet. He has become established as a known musician in jazz, has played on several dozen CDs, and worked with Till Brönner, Mark Turner, Dave Liebman and numerous others. Double Moon Records is presenting a new series "Next Generation" in collaboration with Jazz thing, Germany's most renowned jazz magazine. Young, outstanding artists of modern and creative jazz, who are from German-speaking regions, are presented to a large public for the first time in this series.