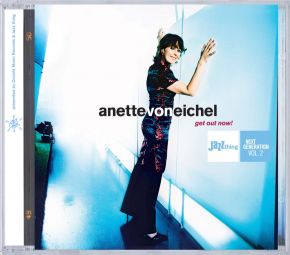 Double Moon Records is presenting a new series ãNext Generation" in collaboration with Jazz thing, Germany's most renowned jazz magazine. Young, outstanding artists of modern and creative jazz, who are from German-speaking regions, will be presented to a large public for the first time in this series. Following Esther Kaiser's debut ãJazz Poems" (DMCHR 71036), the second in this series is also presenting a singer, who has the potential to enthuse a very wide-range public. The German singer Anette von Eichel (born in 1971) considers the focal point of her artistic work to be in developing her own concept of music. Characteristic for this is the repertory of her band, which is oriented to contemporary European jazz and is composed of pieces that are mostly original and have never before been recorded as vocals. On the present CD, we can hear Anette's own compositions and compositions by the band and their environment in addition to "Foxy Trot" by Kenny Wheeler. Anette also wrote the lyrics for many of the songs. After all, the international line-up of the band with musicians from Denmark, Holland, Austria and German guarantees a listening experience, in which the different musical backgrounds are given their due and at the same time blend into a "European sound." Anette put out her own CD ("Welcome To My World") in the Netherlands in 2001.The high point till now of the band's work was its successful performance at the North Sea Jazz Festival 2002. In addition to her work with her own band and freelancing in various jazz ensembles, Anette teaches jazz singing at the Music College in Cologne. and at the King's Conservatory in Den Haag. The band has already been on tour in Austria, Hungary, Romania, Moldavia, Switzerland, Italy, Spain and South Africa in addition to Germany and Austria. The British pianist John Taylor wrote in the liner notes for the new CD from Anette: "Anette von Eichel uses her attractive and flexible voice to good effect on this imaginative selection of contemporary pieces. She has successfully integrated her instrument within a group of good soloists who are all given an opportunity to show their individuality. The arrangements are thoughtful, and Anette's own compositions and lyrics add a distinctive touch to the recording. The range of the material - from the intimacy of 'Mediation' to the challenging 'Foxy Trot' - demonstrate the versatility of the band and the musical goals to which they aspire."