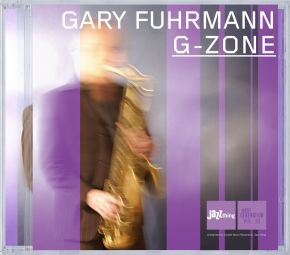 The "Jazz Thing Next Generation" series, in which Esther Kaiser, Anette von Eichel, Ignaz Dinné, Benjamin SchŠfer, Martin Auer, Oktoposse, Cyminology, Christian Krischkowsky and Nadia Maria Fischer had their debuts on Double Moon Records, is now being continued with Volume 10. With his debut album G-Zone, Gary Fuhrmann has created a very promising music business card, which will certainly form the basis for a successful career. He recorded four original compositions and three composed by others with the musicians of his quartet and the two tenor saxophonists Johannes Enders and Jürgen Seefelder as well as Martin Auer (by the way, "Next Generation" musician number 5) on the trumpet as guest, which do full justice to the title of the album. Seven pieces plus a humorous, fun hidden track at the end demonstrate a sensual and highly emotional, stimulating and exciting modern mainstream sound with the required touch of rough spots.
The soprano and tenor saxophonist, born in Worms in the Palatinate in 1978, came into contact with jazz at an early age. His French grandfather on his mother's side was a fan of Django Reinhardt. "It was totally normally for me to listen to this guitarist with my grandfather when I was a child." But before he switched to the saxophone, he first studied classical clarinet. "At some point, I decided that I wanted to study music. I was also certain that improvisation is extremely important to me and that I did not want to waste away my life as a classical musician in an orchestra." The he was a saxophonist for one year in the State Youth Jazz Orchestra of Rhineland-Palatinate and wanted to prepare for the jazz entrance examination at Mannheim Music College after finishing high school and his conscientious objector service. But things turned out differently than he expected. "I had the feeling that I wasn't ready yet to start with music studies. But because too few saxophonists applied in the year 2000, more students were sought." Jürgen Seefelder, in addition to Johannes Enders, one of his two teachers in Mannheim, called him and asked him whether he wouldn't take the chance to start already with his studies. Gary Fuhrmann: "I had nothing to lose. The decision was the right one, because I was still at the very beginning as a saxophonist. As a result, I was able to study the 'jazz roots' starting from the basics."