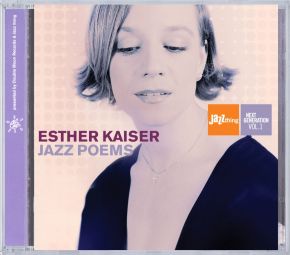 Double Moon Records is presenting a new series called "Next Generation" in collaboration with Jazz Thing, Germany's most renowned music magazine. This will introduce young, outstanding artists of modern and creative jazz, who come from German- speaking countries and regions, to a wide public for the first time. Esther Kaiser is opening this series with her debut CD "Jazz Poems", and she proves decisively that this jazz scene is alive and that outstanding musicians can be discovered in it. Esther was born in Freiburg i. Br in 1975 and discovered the world of jazz of Ella Fitzgerald, Sarah Vaughan and Billy Holiday as a teenager, but also the world of Bert Brecht, Franz Kafka and Khalil Gibran: three names - three fellow travellers. She went to Berlin when she was 21, where she studied jazz singing at the "Hans Eisler" College of Music. She has drawn attention to herself many times since then, for example, as singer of the Bundesjazzorchester (National Jazz Orchestra) conducted by Peter Herbolzheimer, as a founding member of the jazz vocal quartet "Berlin Voices", as a finalist many times in national singing contests, and as Polly in the Three-Penny Opera.This all demonstrates the multifacet talents of this young artist, which makes it practically impossible to pin a label on her. The present album "Jazz Poems"was created through a jazz interpretation of Astor Piazzolla's "Angle Cycle"and is Esther's most personal project till now. The concept involves equal treatment in linking sound and lyrics, whereby the singer wrote almost all lyrics herself as a kind of introspective journey, a diary of reflections about the different stages and movements in life. The partly unusual selection of repertoir should also be pointed out: modern jazz sounds in pieces of classical composers such as Astor Piazzolla and Aram Chatschaturian, but pop songs such as "Fragile" by Sting too. In addition, "Jazz Poems"also includes her own compositions. The album "Jazz Poems"recorded in March 2003 already received the highest praise from experienced colleagues in advance:

"Esther's vocal style and technique is superb and captivating!"

The exceptional line-up of the band accompanying her with the Berlin jazz musicians Carsten Daerr (p), Ralph Graessler (b), Jens Dohle (d),Tilmann Dehnhard (sax, fl) and Friedrich Paravicini (cello) underline Esther Kaiser's power of expression, her "poetic voice" in the true sense of the word, and bestow.