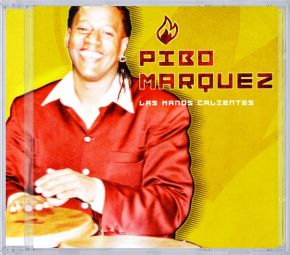 Pibo Marquez, born 1966 in Caracas (Venezuela) where he still lives today, has become one of the most frequent and popular guests at the most important festivals in Europe over the last years. From Montreux to Umbria, Palatia, Espoo, Leverkusen and all the way to Minori and Jazz Baltica, he has traveled throughout Europe and been a great success with audiences. Now there is finally a recording, which documents these successful performances. Live recordings from Espoo (Finland), Minori (Italy) and Dirnstein (Germany) communicate an impression of the charisma of the music and the exciting rhythms. Pibo already played in a Venezuelan folklore band when he was eight years old and learned and experienced South and Central American rhythms from deep down in his innermost soul. When he joined "Grupo Madera" in 1980, he had already traveled through most countries in South America and had studied with many well-know percussion teachers. He traveled to Europe for the first time with Grupo Madera, where he was noticed by others who soon hired him. As a result, he toured and recorded with Carlos Santana, Orchesta La Libertad, Tony Martinez and Orisha, among others. Pibo Marquez is going to tour extensively in 2003 with his own band "Los Manos Calientes".