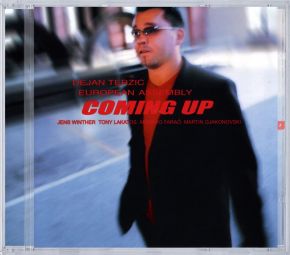 Does an independent European jazz language exist? This question has already been debated heatedly on many pages and during many nights, not the least in the “country of origin” of jazz. A positive answer has now been documented in a musical form: Dejan Terzic, certainly not a new discovery in the German and European jazz scene, has not only put together a formidable band, with whom he regularly tours throughout Europe, but he has also composed all songs for this CD. The drummer, who has already accompanied George Garzone, Tim Hagans, Jerry Bergonzi, Maria Schneider and many others, founded the „European Assembly“ with the goal of bringing together the most outstanding players of their respective instruments in Europe. The Hungarian saxophonist Tony Lakatos has been one of the most sought after musicians in Europe for years (he has played on more than 150 album recordings in the meantime!) and has often worked with Dejan Terzic, not the least in Dusko Goykovic´s band. His explosive, stirring playing contrasts in the band with the rather soft, lyrical sound of the Danish trumpeter Jens Winther, who has not only published his own CDs (among others at Stunt Records), but has also given guest performances with big names such as Kenny Barron, Eddie Palmieri, Joe Henderson and Max Roach. The pianist of the band, Antonio Farao, comes from Italy. He has published his own CDs at Enja and is currently one of the pianists most in demand in Europe. He won the renowned „Martial Solal Concours de Jazz“ in Paris last year, has worked with illustrious stars such as Branford Marsalis, Jack DeJohnette, Joe Lovano and many others. Last not least, another band member contributes the deep tones, who is also one of the rising musical talents in Europe, and from whom we will certainly hear a lot more: Martin Gjakonovski. The bassist, who was born in Macedonia and now lives in Germany, has already toured with Michael Brecker, David Liebman, Kenny Werner and Kenny Wheeler.